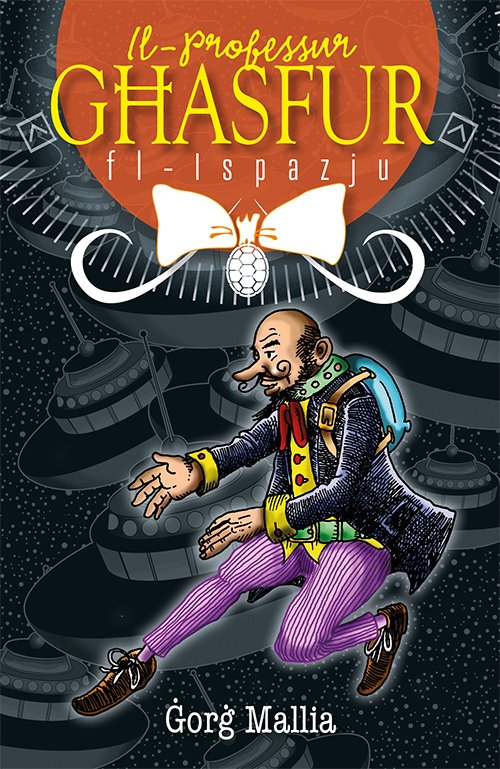 Home » Blog » The Zany Inventor and his Intelligent Tortoise

The Zany Inventor and his Intelligent Tortoise

A very special blog post today – by none other than Ġorġ Mallia, author of the brand new Il-Professur Għasfur fl-Ispazju

I don’t think it’ll come as a surprise to anyone who knows me that, as a young boy, I was an avid bookworm. I devoured books, not read them. Sometimes I’d visit the juvenile section of the National Library in Valletta three times a week, borrowing three books at a go, which at the time was the maximum amount allowed.

That is where I first encountered Science Fiction – that literary subgenre that was to fascinate me for years to come. I dug into abridged versions of H.G. Wells and Jules Verne, of course, but that’s not where the fascination lay. No, the books that really got my imagination going were the ones about young inventors, creating underwater helicopters, space solartron and ultrasonic cycloplanes. Those were invented by Tom Swift Jr, of course, written (often badly) by the pseudonymed Victor Appleton II. And there were the Rick Brant “science adventures” written by the also pseudonymed John Blaine, more low-key, less fantastic, but as much fun. Reading these alternated with my Hardy Boys books and, even … who cares if they were for girls … the Nancy Drew mysteries, which subgenre of reading also eventually manifested itself into a love for crime fiction.

But the highlight would be the “new” Tom Swift hardback that had been acquired by the library, and, if it was summer, after reading it, I would settle down to the other things I spent my childhood doing: writing my own fantasy stories, and drawing pictures and comics.

In spite of there being quite a few brainy inventors in a number of Maltese children’s books, I always thought we were missing the zany, eccentric inventors who could come up with anything, yes, even a Polar-Ray Dynasphere … whatever that might be. And that’s how Il-Professur Għasfur was born. Eccentric? Oh yes, very. Brilliant? More than anyone else can even remotely be. Inventive? Well, he created a trans-dimensional hopping platform in the first book, an invisibility blanket, a pair of functioning wings and quite a few other things. And he has a talking tortoise. Well, ok, the tortoise only talks in between dimensions and on trips to space, but it too is brilliant in so many ways.

And I was so happy to find out that Maltese children agreed with me that the first book was fun, and eventually bought it. Quite a lot, in fact.

There had to be a book two in the Professur Għasfur series, and with Chris Gruppetta’s encouragement, there now is. And il-Professur is joined by another Professur, this one is amazing anthropologist and biologist il-Professur Gremxula, adding herself to the very small cache of female scientists to be found in children’s books anywhere. And there’s even a new narratror, Pawlu, who had only been mentioned briefly in the first book by Katrina, the narrator of that one. And the inventions this time around are just as zany … and a spaceship is the very least of them.

I really hope that children reading Il-Professur Għasfur fl-Ispazju will wallow in the same dreamlike fantasy world I found myself in when I was their age and consuming more science fiction adventures than I did food. And, hey … maybe il-Professur Għasfur will result in the next generation of science fiction writers for children. If any of my readers are in any way like me, they’ll be writing their own fantastic stories the moment they finish reading the book.

And let’s hope lots and lots buy it. I want to write a book 3.