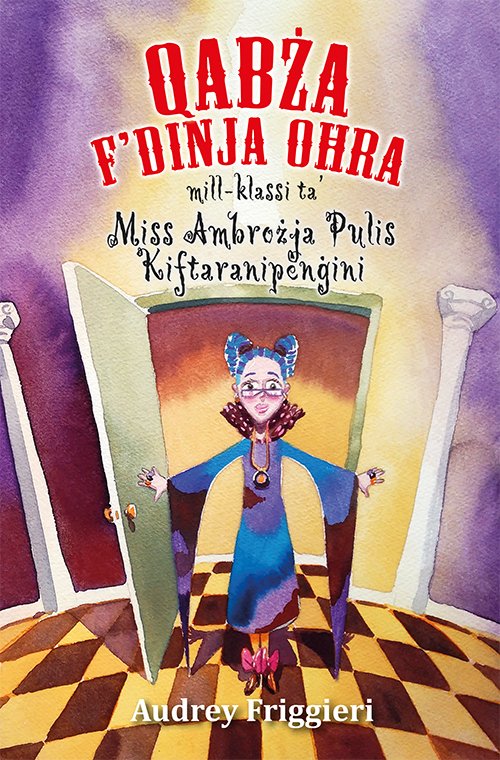 The philosophical underpinnings of Audrey Friggieri’s stories for children

Now that the third book in the series has just been published – Qabża f’Dinja Oħra mill-Klassi ta’ Miss Ambrożja Pulis Kiftaranipenġini – I got to think about what it was that set the story train in motion, what it was that not only inspired me to write, but to actually believe in what I was writing.

I had never made time for the persistent whispers in my ear that kept arguing about what fun  it would be  to see where that story would take me, to sit with it patiently, listen to what it wanted to say. Those whispers were a reflection of what has always concerned and  engaged me in my studies and also in everyday life: how individual experience of the world affect us, and to what extent they shaped our journey in the world. It never made any sense to me that people get judged, labelled and categorised as if they were things, when really nobody could ever know and comprehend what it is like to be anyone else. I kept arguing with my inner self that it was grossly unfair to pretend that we are all the same and that the quality of anything we do depends on ability or effort only. ‘Normal’ does not exist, even though society, from mass media to education, seems to depend  on us all being ‘normal’.

It is a fact that we do not experience ourselves living in this world in the same way. Later on I realised that my thoughts were orbiting  the most fashionable philosophy in Europe  after world war II – existentialist philosphy, which deals with the human being’s  striving to decipher the meaning of life by investigating the mystery of one’s own existence.  Danish thinker Søren Kierkegaard (1813-55) is generally held to be the founder of existentialism. He believed that our subjective take on life is what constitutes reality for us –  it is through the choices that we make that we create our lives and become ourselves. Later, Edmond Husserl (1859-1938) developed these ideas into a new approach to philosophy that examined experience systematically – phenomenology, named thus because it treated everything as phenomena. The sum total of things we experience is the sum total of things we are certain of,  and for this reason the term Lebenswelt, which means literally life’s world, was coined for it by Husserl. The sum total of possibility offered by Husserl’s philosophy is an exhaustive investigation of our Lebenswelt. Martin Heidegger (1889-1976) was a student of Edmond Husserl; he thought that in order to deal with the problem of existence is to carry out a phenomenological analysis  of what it is we are aware of  when we are aware of our own existence. He believed that human beings are constantly pressing into an unknowable future and having to make choices without any certainty about their outcomes, which in turn makes us anxious.

So what does all this philosophy have to  do with Miss Ambrożja Pulis Kiftaranipenġini? This eccentric teacher who has special superpowers (yes, I believe that real teachers have superpowers)  sends her students on a virtual trip to places where they press into unknowable situations that demand that they make choices; these decisions are inevitably a product of  individual  previous experiences. The aim of the stories is to highlight  the importance of previous  experiences when students and people in general face problems in life. Very often  educational systems value  and build on performance in tests for which students have to prepare, study and memorise. Life is not like that. There is no time to prepare ourselves for whatever situations get thrown  at us; what we need is personal, so called ‘soft’ skills such as: belief in our abilities, flexibility, ‘out of the box’ thinking, empathy, a sense of humour and quick decision-making.

Perhaps Miss Ambrożja Pulis Kiftaranipenġini was born out of a dissatisfaction with how we do education. When I look at kids, I do not see workers, fodder for the capitalist machine. I see beautiful, vulnerable human beings who struggle to make sense of life, who need to be seen, listened to, accepted  and loved. I see human beings who can make a difference in the world, and the teacher has a crucial role to play in the journey of each and every child. I look at  the teacher as  a magician, a wizard, a guru, a person armed with a treasure casket of wonders untold – a sort of Mary Poppins, if you like.  And indeed, I do believe that teachers are the ones who have the potential to change lives, inspire in all sorts of ways, impart hope,  kindness and wonder.   I myself am an educator and am passionate about what I do. Miss Ambrożja Pulis Kiftaranipenġini stands for all teachers out there, who, consciously or not, through all that they transmit and communicate by means of all that they are and all that they do,  send their students on virtual trips to places that transform them into hopefully better humans. Let’s take care of our teachers. The world needs their magic.

Magee, B. (2001).The Story of Philosophy. Dorling Kindersley Ltd