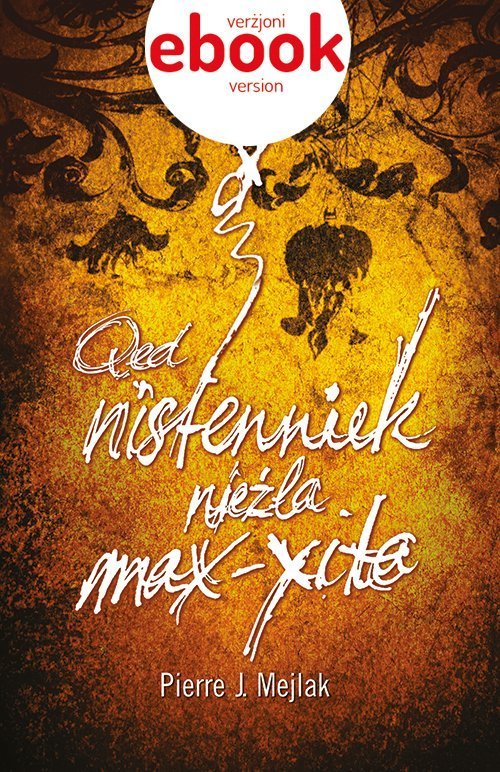 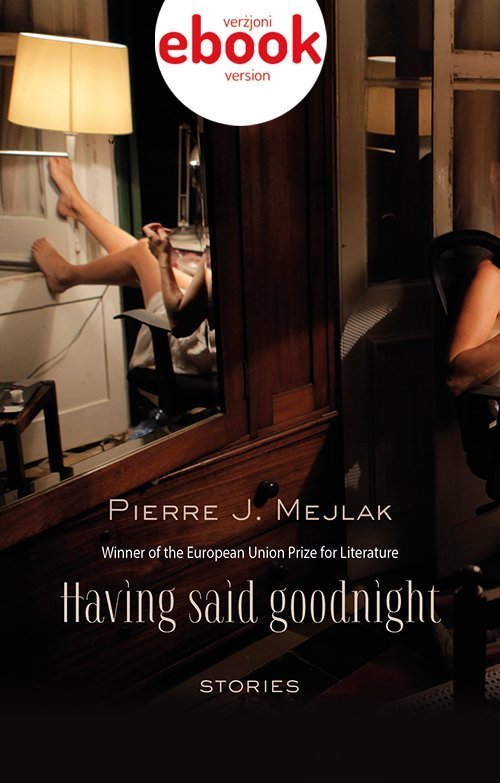 Note, you aren’t buying a print book. You’re buying an ebook you can read in our mobile and tablet app. By proceeding to purchase, you agree to the ebook Terms and ConditionsTerms and Conditions
Accept
Reject
Add to Wishlist
Riħ Isfel | eBook €6.00 Note, you aren’t buying a print book. You’re buying an ebook you can read in our mobile and tablet app. By proceeding to purchase, you agree to the ebook Terms and ConditionsTerms and Conditions
Accept
Reject
Add to Wishlist
Qed Nistenniek Nieżla max-Xita | eBook €9.00 Note, you aren’t buying a print book. You’re buying an ebook you can read in our mobile and tablet app. By proceeding to purchase, you agree to the ebook Terms and ConditionsTerms and Conditions
Accept
Reject
Add to Wishlist
Dak li l-Lejl Iħallik Tgħid | eBook €9.00 Note, you aren’t buying a print book. You’re buying an ebook you can read in our mobile and tablet app. By proceeding to purchase, you agree to the ebook Terms and ConditionsTerms and Conditions
Accept
Reject
Add to Wishlist
Having Said Goodnight | eBook €11.00 Add to Wishlist
Having Said Goodnight €15.00 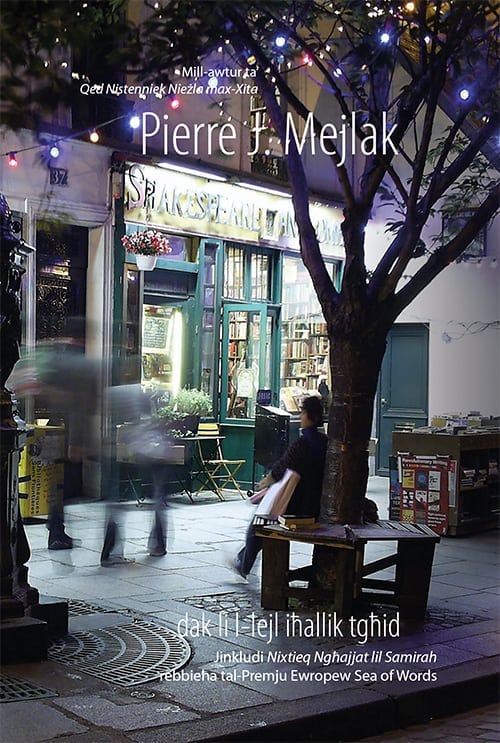 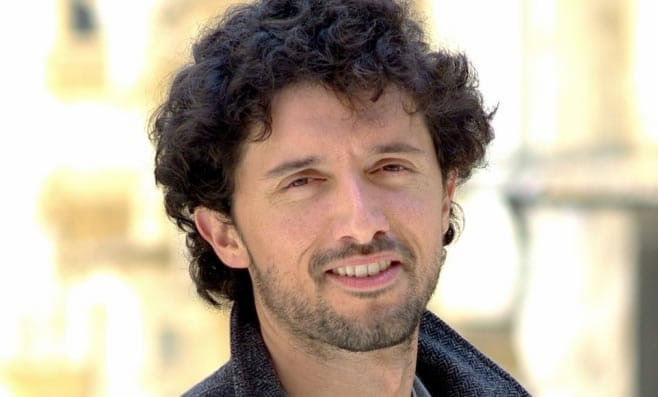 Pierre J. Mejlak
Pierre J. Mejlak is most known for his collection of short stories Dak li l-Lejl Iħallik Tgħid (Having said goodnight) which was awarded the EU Prize for Literature in 2014 and which has since been translated into ten languages. His work has inspired a TV series, a short film and a number of theatre pieces. In his spare time, he loves playing table tennis and believes his top spins hold serious promise.
View Profile
Tasting the joy of writing
(Times of Malta review)

When asked, during an interview, how he had hit upon the idea for his book The Name of the Rose, Umberto Eco simply replied, “I felt like poisoning a monk.” That, for the semiotics professor and author, was inspiration enough.

If I had the chance, I would ask the same question to Gozitan author Pierre J. Mejlak. What does he feed his imagination so that, in return, it fattens his mind with storylines and populates it with memorable characters? What does his trained eye see that we don’t? And that most shallow, yet nagging, of questions – why does he write?

Maybe Mr Mejlak writes to remember. After all, the stories in his latest collection, Dak li l-Lejl Iħallik Tgħid (What the Night Lets You Say), are spiked with memories, regret, closures from the past that the characters would like to change the ending to, and stories that are only recalled in hours of dire need.

Mr Mejlak sees a story in everyone – as he writes in Riħitu (His Smell), “t-toroq kollhom djar bin-nies mimlija stejjer u ħolm” (the streets are lined with houses and the people inside brim with stories and dreams). Underneath our costumes and routines, we all have a story, a tragedy that ends in laughter, a joke that ends in tears. And the author’s role is to read us in degree zero, and then fill in the blanks between our thoughts and limbs. Mr Mejlak finds clues – a twitch or look here, a mannerism there – and follows them until he has the whole story.

Such clues enrich Mr Mejlak’s stories with intricate detail. Indeed, the author relishes minutiae – small, eavesdropping details that tell big truths. In L-Ambaxxatriċi (The Ambassador), it is the ambassador’s choice of perfume that first outlines, and then colours her in, in all her layers and complexities. In Kolp ta’ Stat (The Rebellion), the protagonist, Mark Delia, recalls his former girlfriend’s mole on her shoulders, and on that dissects a whole anatomy of loss. And in L-Aħħar Sajf Tiegħek, Amy (Your Last Summer, Amy), there is a wonderful passage where, as the protagonist’s father grabs him by the ears and lifts him up, he can see parts of his father that give an indication of the whole: “Il-qalziet ta’ taħt blu. Sidru kollu suf. Il-katina rqiqa tad-deheb bil-kurċifiss imdendel magħha” (His blue underwear. His hairy chest. The thin golden necklace with the Holy cross dangling from it.)

Yet sometimes, the details come so fast that they don’t allow the readers to fill in their own blanks. In Riħitu (His Smell), especially, the poetic lines cannot sustain either the musicality of the words or the dripping detail, and so they crumble into prose. Here, Mr Mejlak’s prose is sinewy, with enough lungs for the sprint of a short story, but not enough pace for longer ones – the stories in Dak li l-Lejl Iħallik Tgħid (What the Night Lets You Say) are much longer than the ones in Mr Mr Mejlak’s other collection, Qed Nistenniek Nieżla max-Xita (I’m Waiting For You to Fall With the Rain).

Despite the details, Mr Mejlak has enough discipline to keep the characters a mystery, to us and to themselves. Between the characters are big ice cubes of silence, melting away their lives and the relationships between them.

Back to my original question, maybe Mr Mejlak writes because he wants to forget. To forget how, despite living in the age of man, the world goes on without us. As the widow in Preludju (Prelude) listens while the conversation during her husband’s funeral moves to surface realities, she realises how dispensable everyone is and how, despite what we think, when we die, life, in all its triviality and importance, still goes on.

But maybe, Mr Mejlak writes because he simply wants to write. He wants to travel on a flying carpet of words, from Spain in Mort Naraha, Pa (I Went to See Her, Dad) and Malawi in Kolp ta’ Stat (The Rebellion) to a war torn country in Il-Kubu ta’ Rubik (Rubik’s Cube) and, of course, Gozo.

And Mr Mejlak wants to find joy in writing; the joy of beautiful metaphors like the one in Kolp ta’ Stat (The Rebellion) describing three pairs of clean, white trainers as “qishom abbatini ħdejn xulxin” (like altar boys standing next to each other). And, as in Nuria Angels Barrera, Mr Mejlak wants to taste the joy of writing as a secret pursuit, an act of protest, of love, of revenge.

Writing, like all art, is a craft, and there is nothing better than reading a finely crafted book. But it takes an artist to transform that craft into something more, and that is what Pierre Mejlak has achieved once more with Dak li l-lejl iħallik tgħid.

He has followed in the footsteps of his last book Qed Nistenniek Nieżla max-Xita, and released a series of short stories. This time round, the stories are longer, and differ considerably in style. Whereas the others had been almost tableaux in their brevity, these stories are longer and delve deeper into each character.

If one had to find a common theme between these stories, it would have to be women. Each story explores a different aspect of the fairer sex, and the tensions between the opposite sexes. The book reads like a box of chocolates, each story with its own particular flavour. At times Mejlak’s pen draws smile after smile (as in Il-Barranija), and at others he is deeply disturbing (L-Aħħar sajf tiegħek, Amy).

As much as I dislike comparisons, they are inevitable. I admit I missed the broad brushstrokes and sketchy lines of Qed Nistenniek Nieżla max-Xita, and some of the stories do feel slightly long-winded. There are times when one feels the author loses focus momentarily.

The stories Riħitu and Kolp ta’ Stat are perhaps the least enticing, and feel like extended sketches.

Yet, there is also a new maturity here, and it feels as if the author is no longer an alert observer with a ready brush, but an integral part of his work. I was happy to read once more Mort naraha, Pa (which appeared in 45, Merlin Library’s anniversary publication), and found its magic has not worn off.

One of Mejlak’s hallmarks is his ability to bring together past and present, foreign and local, into one cohesive whole. His characters use mobile phones, internet and technology without losing any of the timelessness that defines great literary characters. He also handles our bilingualism confidently and glides smoothly from Maltese to English when the occasion warrants it.

It is also heartening to find out that the story Nixtieq ngħajjat lil Samirah has won the European Prize ‘Sea of Words’, making a strong case for contemporary Maltese literature as being of a European standard.

The publication comes in a neatly designed volume, typical of Merlin Publishers’ high standards. However, I am slightly irked that the reviews of his previous book are placed right at the start of the book rather than at the back or on the inside covers. Somehow, to me it feels like a cheap marketing ploy, and it’s a pity to find it in a book that needs none.

Mejlak belongs to a new generation of writers who have ushered Maltese literature into the contemporary arena. Along with many others, he moves away from the heavy-handed dogmatic melodrama of post-colonialism and offers us a new vibrant literature.

Dak li l-lejl iħallik tgħid should be on everyone’s booklist this summer, and will surely transform any summer night on the verandah into something more meaningful.