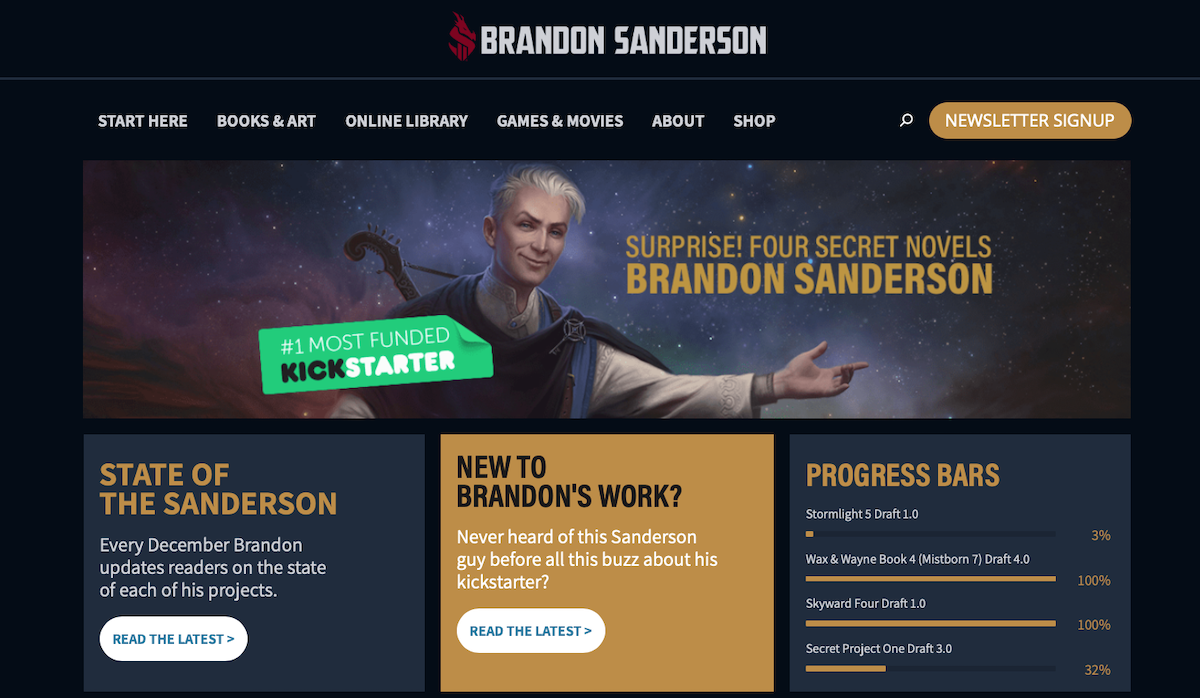 Home » Blog » Learning from a pro

Learning from a pro

A couple of weeks back, author Brandon Sanderson announced that he was going to kickstart four novels he had written whilst stuck at home during COVID lockdowns. Plenty of authors have tried crowdfunding to get their projects off the ground, so nothing particularly noteworthy in that.

Except that within half an hour of launching, Sanderson had managed to raise the full $1,000,000 he was asking for. And it didn’t stop there: to date his project has raised more than $30 million, making it the most successful project in the history of Kickstarter!

Sanderson is a brilliant epic fantasy writer who really rose to prominence when he was asked to finish Robert Jordan’s Wheel of Time series (and, by all accounts, did a great job of it). His books in the Cosmere fictional universe – that contains fourteen books – are quite popular and he has also written a number of successful young adult novels.

That brief recap of Sanderson’s career does hold an important detail: he is extremely hardworking. In a normal year, he spends three months on the road to promote his books. Indeed, the four books that he’s kickstarting were written in the time he usually spent on the road. Each year he puts out at least three books, of which one is more than 1,000 pages long. He is undoubtedly one of the most prolific writers out there, an example of what a professional writer is.

Even so, that does not really explain why his Kickstarter has proven to be such a success.  His work is relatively well-known – particularly within the genre – but he’s not as famous as, say, George RR Martin or Neil Gaiman. How has he managed to convince so many people to back him, particularly when the cheapest pledge is of $40?

The answer lies partly in the quality of his work. He is a New York Times-bestselling author who knows how to craft a series of books that can hook fans, keeping them both delighted and eager for more.

But there is more to Sanderson’s loyal fan base than the quality of his writing. He has understood that as an author his job isn’t simply to write but he needs to actively work to keep people engaged.

For instance, in 2008 he set up the podcast Writing Excuses and for ten years, Sanderson was a regular on this podcast that provides writing tips to the podcast’s thousands of listeners.

In a similar vein, he also has a YouTube channel where he, again, delivers writing advice along with answering viewers’ questions and talking about the worlds that he builds.

This latter channel has almost 350,000 subscribers which again, Sanderson has built up by being constantly present and delivering the kind of content that people want to watch.

Which explains a lot. Most authors will only do a half-hearted attempt at promoting a book once it is published and then will almost disappear until they have something new out. There is no consistency nor a genuine desire to interact with their readers.

Inevitably, the focus in this story will be on the money that Sanderson is managing to generate. Just as predictably, other writers will also try to kickstart their work. Some may succeed, but the likelihood is that most will fail.

Because Sanderson’s success is the result of years of hard work where not only has he forced himself to sit down to actually write but he’s also made the effort to build his fanbase. He has, to use a marketing phrase, built his own brand.

And there is a lesson in what he has done that many other writers would do well to learn.