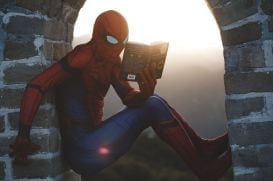 Home » Blog » GUEST POST: The many joys of fanfiction

When The Cursed Child came out three years ago, fans of the Harry Potter books rejoiced.  At last they had the sequel that they had so longed and asked for, in spite of J.K. Rowling’s insistence that she was done with young wizards.

Such was the craving of fans that until Cursed Child came out, they turned to the next best thing: Harry Potter fanfiction.

As the name suggests, fanfiction is writing that includes characters and places from published works but it’s written by fans rather than the original creators. Most readers scoff at this, relegating fan fiction to sub-standard, barely comprehensible writing that plagiarises others’ finely curated stories. Yes, there is an element of that. Yet there is also a lot of excellent fanfiction out there.

In fact established editors are known to sift through fanfiction because some of it is so good that it too is published. I have to admit that I really enjoyed Pride and Prejudice and Zombies, a book (and eventually a movie) that started out as fanfiction but became so popular that a publisher picked it up.

The attraction of fanfiction is obvious.  You get attached to a group of characters in a book, TV series or a game and want to know more about them or the world in which they live. Yet the people who created them don’t always want to keep on writing in that world; or the TV series in which they appeared has been cancelled. In all these instances, fanfiction can satisfy this particular thirst.

What should not be downplayed is the attraction of fanfiction for people who want to write.  Not only do you get to live out your own fantasised version of your favourite characters but it is actually good practice to put together a story. It helps you learn how to pace a story and keep interest alive till the end whilst having the comfort of working in a universe that is already fully formed.

In fact, fanfiction is actually a good way of getting children writing. The possibility of creating a story about fictional characters they know love is often enough to overcome their reluctance to write.

Why not try it during the summer holidays?

There are many sites that host fanfiction but the most popular are FanFiction, Quotev and Wattpad.  Watch out for, however, of ratings classifications that indicate the level (and kind) of sexual content involved in the stories.

Paul Grech has written about players who made the Italian game great in Il Re Calcio e-book series. He is also the publisher of Paġna Mmarkata, a magazine of original Maltese writing that is also a bookmark.

Storja mħawda! Would you like to get a taste of Maltese literature but you don’t read in Maltese?
More news