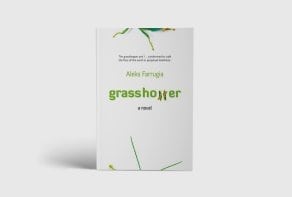 A merry band of lads meet regularly at The Grasshopper. The bar is their “temple, church, parliament, brothel, heaven and hell”. It is where they banter about their jobs, their families, their love lives. Most importantly it is where their future is decided – with a tipple in hand.

This is the world of Daniel Hart. A member of the Brotherhood of the Drinking Glasses.

“You could fit fifty people in the place if you put them standing side by side and take their entrails out to save space. But for us that place was as wide as the fucking world. It was where all our major decisions in life had been taken,” narrates Hart, the protagonist of the book.

John, for example, divorced his wife over the third double clean vodka one evening. Frank decided to risk a million and his family home to buy out a failed printing company after a night of Jack and Coke. Bojan announced he was marrying the love of his life, a girl he had barely known for more than a few weeks.

Hart readily admits that he frequented The Grasshopper for the girls. “And for my friends. But mostly for the girls.” He always aspired to be a novelist, but somehow ended up working in public relations, a job which bored him out of his wits. Until a chance encounter with Sybil, a successful paperback writer in search of inspiration, changes all that. For both begins a dark chaotic journey that marked them and all those who crossed their lives.

Grasshopper is a quintessential tale of the truths and lies we tell ourselves about life and love. It is a novel about aging, love and regret, and a story of decisions and consequences; of emotional and sexual connections; of raw and lyrical tragedy.

Author Aleks Farrugia, 37, has a knack for crackling dialogue and well-defined characters. His writing is fast-paced, crude and real, tinged with despair and bittersweet ambiguity, making Grasshopper hard to put down.

This is Farrugia’s first novel, written over six months, mostly during his sojourn in Paris. Farrugia is a lecturer at the Faculty of Social Well Being at the University of Malta and was previously an editor of a Maltese language newspaper. He wrote this novel in English as “it is best language that embodies the zeitgeist of our times”.

Merlin Publishers director Chris Gruppetta spoke of Merlin’s divergence into fiction in English: “Merlin is primarily a Maltese language publication house, however, we feel that we ought to give a voice to Maltese literature in English, especially when we get a high-calibre manuscript like Grasshopper. Readers have shown us that they are keen on this kind of literature”.

Grasshopper is available from all leading bookshops or directly on online at merlinpublishers.com